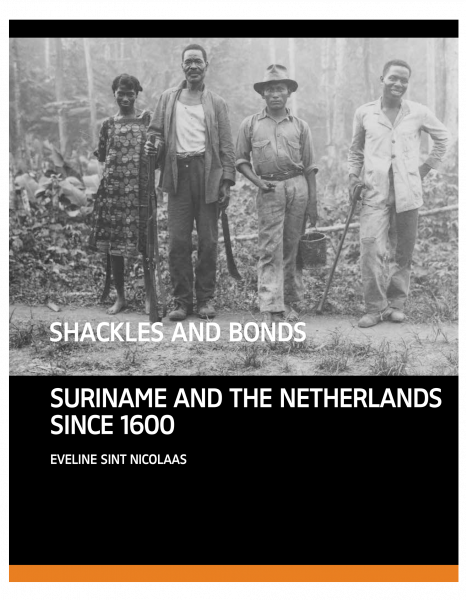 Shackles and Bonds uses objects from the Rijksmuseum collection to tell the shared history of Suriname and the Netherlands. Viewing these paintings, drawings, artefacts and photographs from multiple perspectives allows us to tell a diversity of stories.

A glass used to raise a toast to a plantation is inscribed with the words ‘The prosperity of Siparipabo’, but it also features an engraved scene of enslaved people – a juxtaposition which today leaves a bitter taste in the mouth. This glass can be used as a vehicle to tell the story of the appalling conditions in which enslaved workers lived on the sugar plantations. A viewing box containing a miniature three-dimensional scene of Zeezigt plantation was a showcase for the property of the proud owner, but it is also a powerful medium for revealing the position of enslaved people on this plantation. And what do we learn from the photographs in an early twentieth-century album showing jewellery belonging to South Asian indentured workers? The photographer characterizes the scenes as ‘picturesque’, but what meaning did these items hold for the women themselves? In the often personal stories behind the objects in this book, we also learn about the Surinamese people who visited the Netherlands over the centuries. Who were they, and why did they make the journey?

Suriname was declared a republic in 1975, and with this the formal ties between the two nations were broken. This is the moment chosen to conclude the book, in the knowledge that the shared history of Suriname and the Netherlands persists to this day. Shackles and Bonds is part of the Country Series published by the Rijksmuseum, in association with Vantilt Publishers. Each book in the series uses objects in the Rijksmuseum collection to explore the shared history of the Netherlands and one of the following countries: Ghana, Indonesia, China, Japan, Sri Lanka, South Africa, India and Suriname.